To understand what is meant by good and bad acoustics, it is essential to understand the concept of reverberation time. 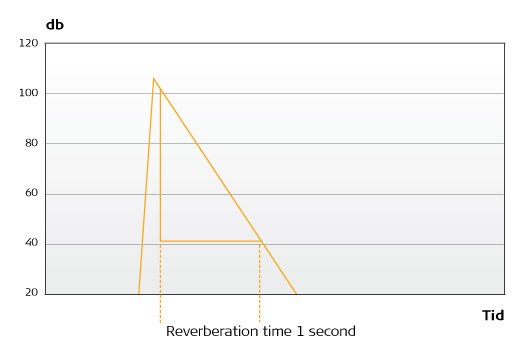 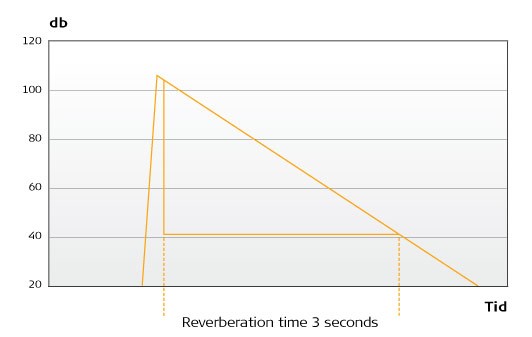 Our ears react to the ‘tail’, and it is the tail which we associate with the room’s acoustics. In the case of a long tail, the room sounds echoey or sonorous. If the tail is short, the room sounds ‘dry’. There are several ways of describing reverberation. A bathroom has a relatively long reverberation and sounds echoey (and is a wonderful place to sing!), but very different to the reverberation in a church, which also sounds echoey. The difference in reverberation is because the two rooms differ greatly in size, but also because in the church there are deep tones that die away, and they are not present in the bathroom. The ear perceives these differences, and connects them to the room’s sound or acoustics. In other words, the individual frequencies die out differently, which is a very important consideration when you want to create good acoustics.

Absorption is a measure of how much sound-absorbing material there is in a room. Some materials have a sound-absorbing effect, even though it might not appear so on the face of it. Thus, plasterboard, glass, and certain wood floors absorb deep sounds. However, we will return to this later. The sound-absorbing effect of different materials varies greatly. Basically, concrete and masonry do not absorb any sound at all. Carpets, textiles, mineral wool and glass wool, cement-bonded wood wool (Troldtekt) etc. on the other hand are very sound-absorbing.

The unit of measurement is the metric sabin (m2 sab), in order not to confuse it with a ‘normal’ area. The absorption expresses the total effect in the room of the material in question. The physical meaning of the absorption can be expressed as the area of an open window (which absorbs 100 per cent, since the sound does not come back into the room) with the same sound-absorbing effect as the actual number of square metres of the material.

We are now able to set out the most important formula in acoustics, Sabine’s equation, which links the reverberation time (T) with the room’s volume (V) and the absorption (A), and the proportionality factor of 0.16:

Sabine’s reverberation equation means that it is possible to calculate in advance the resulting reverberation time when the size (volume) of the room is known, and when you also know how much absorption has been introduced to the room. Even before the room is built, it is therefore possible to predict the reverberation time which will eventually be experienced in the completed room. In order to be able to carry out the calculation as described, in addition to knowing the room’s dimensions, it is also necessary to know the acoustic properties of the building materials which will be used.

This takes the form of data for the sound absorption coefficient (α) (see, for example, the table on page 9). As the sound-absorbing effect of the materials is frequency-dependent, this is reflected in the α values with the different frequencies, normally in the frequency range 125-4,000 Hz.

It is usually possible to obtain the α values for the various materials from the websites of the individual manufacturers (see www.troldtekt.com, for example). In manuals, and also on the internet, it is possible to find data for building materials which are not specifically acoustics materials, such as floors, windows, masonry and so on. The table on the next page can also be used as a starting point. As can be seen, the calculation is linear; in other words, the contribution made by the different materials and building elements to the absorption are added up to give us the total absorption (A), which is included in Sabine’s equation. For a given room, the calculation is made individually for each frequency band. This gives us the reverberation time in the room for each frequency band, and thus the reverberation curve for the room. The reverberation curve is the reverberation time’s frequency dependence for the room in question. The shape of the reverberation curve expresses the acoustic quality of the room in question. However, we will return to this later. 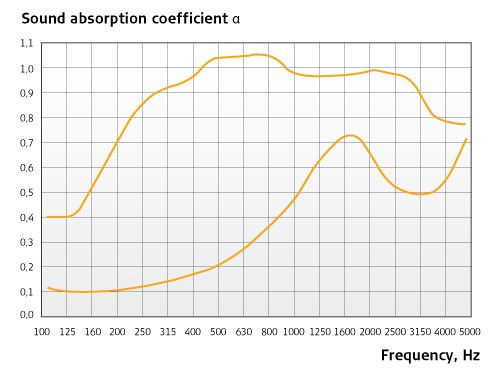 >> Read the next section on different absorber types