This section introduces the concept of speech intelligibility, which indicates how well we perceive the spoken word in a given room. This is an important quality factor – not least in rooms which are intended for communication. In addition, the section introduces the measuring methods which can ensure good speech intelligibility, especially in situations where there is a sound system in the chain between speaker and listener.

It is important how well we perceive the spoken word in a given room. Not least in rooms designed for communication such as auditoria and theatres – or even railway stations.

Today, there are several methods for measuring speech intelligibility, but the method which is now regarded as the standard approach is the so-called Speech Transmission Index (STI). The STI is an objective measurement and calculation method that includes a number of parameters about the actual space, according to which it is then possible to calculate the speech intelligibility that can be achieved in the given circumstances. 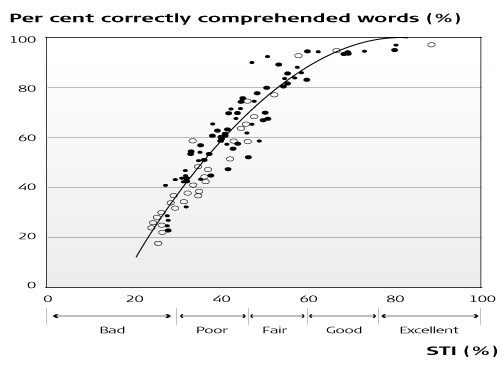 The method can also be used in cases where there is a PA system in the ‘chain’ between the speaker and the listener. In this situation, speech intelligibility results from the total effect of the room and the sound system. A very good sound system will thus be no guarantee of good speech intelligibility if the room has a long reverberation time when the listener is sitting a long way from the speaker. Here, you are able to make requirements for speech intelligibility, for example in the form of an STI value for the entire chain comprising the PA system and the room. It is then the responsibility of the system supplier or the sound designer to ensure that the requirements are met by the final system in the room in question. In this way, the client can ensure that the final solution is satisfactory and functional. An experienced sound designer can use the calculations to ensure that his system has a reasonable chance of delivering the required results in the room in question.

Photo: While respecting the character of the existing buildings, the acoustic requirements were taken into account during the refurbishment of the Danish National School of Performing Arts, the Royal Danish Academy of Fine Arts Schools of Architecture, Design and Conservation, the Rhythmic Music Conservatory and the National Film School on Holmen in central Copenhagen.

It may be that the room’s acoustics are unsuitable for a PA system, and that efforts should be made to improve them first, as a PA system cannot rectify poor acoustics.  If you are installing a sound system (a PA system) in a room, there is a simplified method for measuring speech intelligibility – STIPA. With STIPA, a special measuring signal is used which is played through the sound system.  By using a special sound meter, it is possible to measure the STIPA value of the complete system and the space at the location. A STIPA value above 0.6 indicates a good system. It should be mentioned that other speech intelligibility measures which have been used over the years, for example AI (Articulation Index), ALCONS (Articulation Loss of Consonants) and RASTI (Rapid Speed Transmission Index), are today all considered as being out of date.

>> Read the next section with an acoustics glossary