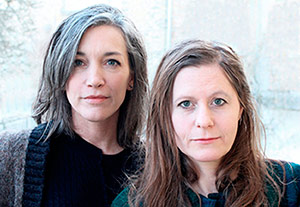 Don't go grey is a creative collaboration between Amalie Bo and Netter Andresen, who have a combined 30 years of experience with product and textile design as well as visual communication.

Don't go grey operates with design in the cross section between art and architecture. Both designers graduated from the Royal Danish Academy of Fine Arts, School of Design, and combine their creative skills with dimensioned plan solutions, adding subtle sensuality and narrative to each unique project. An interior space can influence your mood, energy, creativity and productivity, which they want to stimulate and do so professionally, whether on a small or large scale.

The commission at Hillerød Music School involved injecting new life into the dull practice rooms and replacing worn-out blinds and superfluous equipment with appealing and unifying design. At the same time, the acoustics needed enhancing and integrating with the new interiors.

Each room given its own identity
At the music school, where the pupils spend about half an hour at a time in the practice rooms, one of the designers’ aims was that each pupil should quickly feel inspired and enthused to play their respective instruments with complete concentration. The pupils needed to leave the school feeling uplifted and with a desire to return. At the music school in Hillerød, Don't go grey has extended the building’s visual identity from outdoor signage to indoor acoustic regulation and decoration. Inside and out, distinct materials and colour combinations play a key role. Every room has its own particular musical function. The idea was to create a unique feeling in each room, which would then clearly set the mood.

Functional design
From the outset, Don't go grey’s ambition was to replace the institutional surroundings with inspiring, functional design. In the new interior, the amount of furniture has been reduced to the bare minimum and renewed to create a more homely and informal feel. The rooms are sometimes used by lots of people, and sometimes by just one or two, so it was important to make it possible to communicate in different ways. Considerable thought went into incorporating the digital workstations into the spaces, unlike previously where screens and electronics cluttered up the surroundings. The whiteboards have been retained and integrated with Troldtekt acoustic panels and noticeboards in grey hues to create a sort of patchwork effect. The new, textured Troldtekt acoustic panels are interspersed with sections of solid wood and patinated metal which refer to the musical instruments.  Unlike the old blinds, the panels require a minimum of maintenance, they solve the acoustic issues and support the clean and minimalist look of the rooms. All key functions are integrated in the design, which means that it is easy to use and clear up the room afterwards while encouraging pupils to look after the facilities and the equipment.

Musical inspiration
As each room is used for teaching pupils to play a wide range of instruments, the number of acoustic panels varies in the rooms, just as their positioning is also crucial for a good acoustic result. As part of the overall design, Dont go grey has made it possible to add or reduce the number of Troldtekt acoustic panels if changes are required – without compromising the visual look. Overall, the two designers have taken the instrumental sounds and interpreted them in visual wall compositions, making the new rooms individually recognisable and a pleasure to behold in their own right. For example, one room expresses energy, the intention being that it will have a bearing on the way the music is performed, while another room employs a calmer style to encourage concentration.